I did, its true..I blew them out, ..I knew it was bound to happen, and I went back and forth in the shoe store not sure what I wanted to buy as replacement shoes.  I ended up leaving “Marshall’s,” almost purchasing a leather faux birkenstock pair of slide on sandals, but was just not sold. 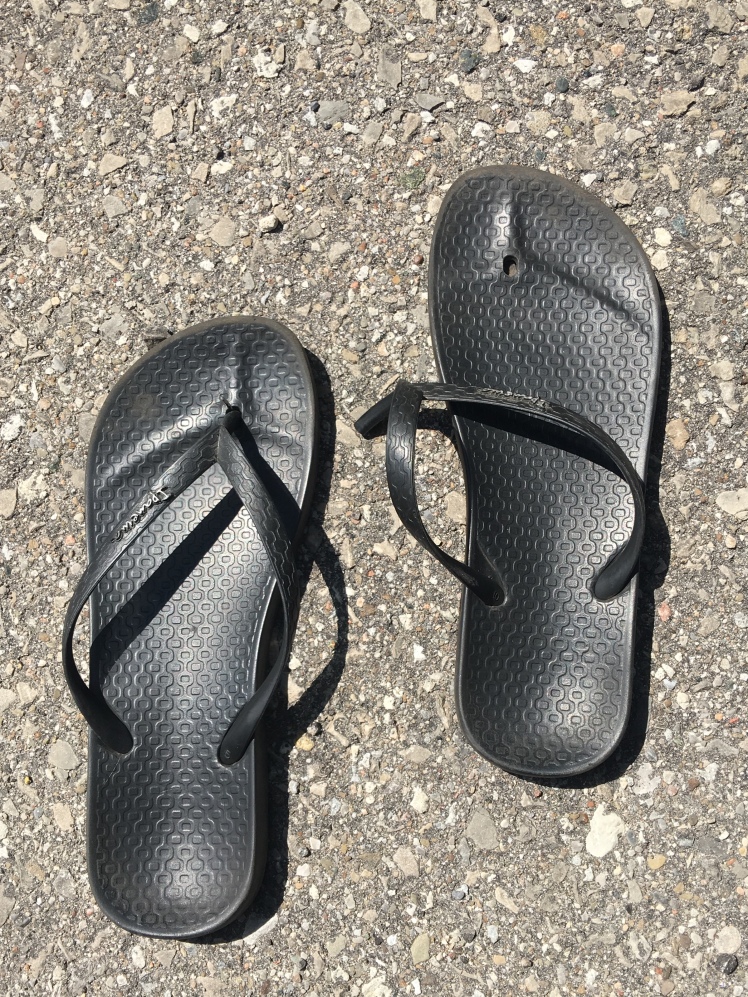 I jumped in the car, and decided that I would take another gander  at another shoe store.  As I exited the volvo wagon..it happened, and I nearly fell head long  on my face, as my one foot got tangled in my ruptured shoe, making it essentially just a “flop,’ since the flip part was no longer attached.

I grabbed up the shoe, and walked , one foot bare, into the store.

“I’m here for some sandals.’… I said in an authoritative voice.. ha

This was fairly obvious to the salesgirl, and she smiled croookedly at me.

“What was it that you were looking for exactly?”

“I asked if she had some “birkies,” but they only had fake ones.  I was somewhat sad, but then realized, I wouldn’t be completely poor if I settled for a look a like pair.  Since I wasn’t about to go hobbling about on my one  sandal, the purchase was decided.  Black slide on rather practical sandals were aquired, and much as it pains me to admit this, they were comfortable, but they are repulsive looking.  Can the two not go together, I ask you?….because crocs and Birkenstocks are really  comfortable… so at least they have that going for them.

I do belive in “form following function,” but am also a creature who really enjoys pretty things, and objects that are beautifully designed.  It almost creates a physical angst  in me to purchase something practical….truth.

My eldest son, and I had been planning for about 6 months,  to attend a writers’ conference together in Portland, Oregon.  The weekend was imminent, and I was filled with eager anticipation for this event.

It has been a marvelous thing to share in our love of writing together.  He has been writing just a little longer than I have, and has completed two fiction manuscripts.  His genre is thriller/horror, so it’s a completly different direction than the path that I have taken.

I have been honest with him, and let him be aware that there are some of his stories I would not read alone, or in the middle of the night.  I struggle with staying asleep as it is, and have had nightmares from way back to my childhood.  I am quite certain that a dream interpreter could illuminate many insights if I was to try and desipher my erratic, slumber state.

We have enjoyed discussing the creative process extensively, and I have read most of his work, including his short stories.  Even though some of his stories chill me like a store bought bag of ice,  I have to share that its been one the most soul satisfying things in my life to share this love of writing with Zach.

It is true, if not a tad cliche to verbalize that some things in life are just priceless.

This hotel where the conference is held, is directly next door to the Portland airport, and each morning of this weekend, as we exited my son’s red pick up truck, there was the sound of planes taking off, and landing, that could  be heard roaring overhead.  The smell of plane fuel always gets me excited, and intoxicates my senses , because it feels like I’m about to embark on an adventure.  It was true..I was..with my son….the best excursion of all.

The learning process can be lengthy, and we both are finding that there is much that we have no idea about.   It’s been gratifying to attend lectures the last few days, and  we have met some interesting fellow writers, and Zach has had his work critiqued, and has pitched his work, and learned how better to fine tune his writing, and his tag lines.

It can seem overwhelming these goals that we share, but how much better it is, to forge a new path onward with someone that you love.  It feels like we are intrepid wanderers finding a shared passion that unites us in ways that are profound.  There is a mutual respect of one anothers” work, and there is encouragment found in one another.  This has been an unexpected gift, and a trip that I will treasure for the rest of my days.

I really enjoy seeing how his mind works, how he is best when he thinks on his feet, and he enjoys the process, of the unexpected, and the obtuse challenges that often go alongside it. 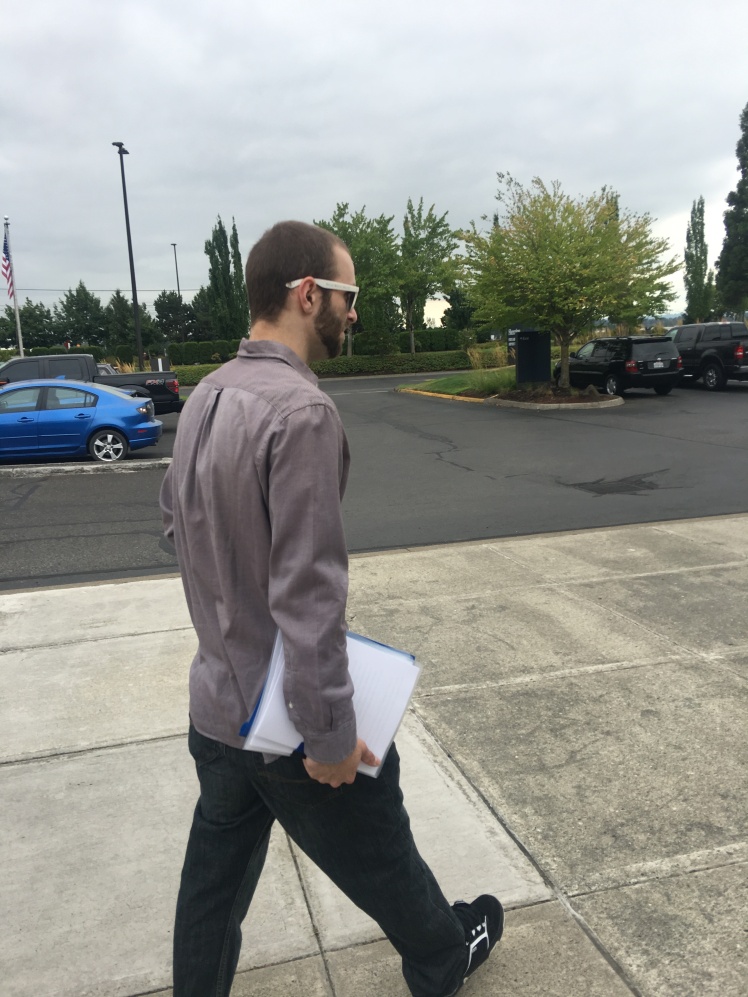 I wonder if the show, “ The Story of Us,” hits a major league home run because it does exactly that?  I became immersed in that story from the first words… the scene.. It inveloped you, and you were surrounded ,  like swimming in the midst of  a whirlpool.  You were hooked, because the story resonates with my own messy life.

I have mentioned before that writing has  become such a relaxing and cathartic process.  It’s a way to dump your feelings out on the black and white of a piece of paper, or a computer screen.  It allows for more headspace  when the words are released into the scape of the page.  It cleanses, and purifies the dusty cobwebs that cling to the rafters of my skull, thus making room to learn new things, and embody present challenges.

Sitting out back on the hammock, and discussing current events, I swing back and forth, like a pendulum.  Both of us living for the moment, and enjoying the now of it all.

I marvel at how quickly the hourglass is sifting it’s sand, and through experiences in both of our lives, we are becoming the next of who  we are meant to be.

Like a tiny root pushing it’s way determinedly through the seemingly impenetrable rock, growth is occurring, and once again fresh hope is captured.

Being sympatico with one of your grown up children is one of the most soul satisfying experiences to date.  I am grateful for Zach, and thankful to God that I was picked to be his Mum.

As a young boy he would be transfixed for hours with “ building LEGO’s,” and “ k-nex,” and we would play  trains with wooden tracks, and enjoyed playing cars for hours on the coffee table.  Doing play dough on the kitchen table was a daily creative experience, and we often baked banana bread together.  Mac n cheese would be the lunch of choice, and often several kids from the “ hood” would join us,

He would pronounce his “L’s,” like “ W’s,” so his brother, he called Wogan, instead of Logan.

The song playing through my headspace at present is “ Precious Memories”…and it’s Johnny Cash’s deep throaty voice that’s singing. I find myself nostalgic for the children that I knew then, and of the ones I know at present.

A photo popped up on my Facebook page, from Zach and I at the cottage from 10 years ago.   It confounds me that the time has passed in a millisecond, and the amount of loving and that there has been a great deal of losing that  has transpired in our lives.

Looking to the future can be a daunting experience.  There is some anxiety in it, but there is also eager anticipation of what’s to come.  It must be the push and the pull of it all that stretches us to grow, and pursue the next thing out in front of us.

Transformstion can occur.  Apparently here in the household where my son resides, with Logan and Natalie, Philip, and Dallas, they have at long last made friends with their neighbor “ Debbie,” who was formally known as “ Debbie Bitchington.”

This neighbor was just so nasty to the kids… setting her garbage bins in the street, so that they couldn’t park near the curb, yelling at them, and at times screeching profanity, and calling the police on them.  To say she “ had a beef with them,” would be saying a gross understatement.

It would seem that Natalie had a 3 hour conversation with her one day, all about her cat…which in and of itself, is miraculous, and Philip has also chatted with her on more than one occasion.

As Zach and I pulled into the curb after our conference one afternoon, “ Debbie” was standing on her driveway sweeping yard debris, and turned to wave  at us, and not with just one finger either.

I was shocked.. I mentioned it to Zach, who said..” I know… it’s kinda weird almost,”

I greeted her with a cheery “ hello,” and tried to not let my jaw fall onto the lawn when she responded in kind.  Our eyes met, and while hers seem to signal uncertainty, mixed with awkward shyness, she seemed more content.

Such a relief… I was really just so proud of all of the kids for forging a better relationship with their neighbor.  There is hope that blossoms when previous walls come crumbling down, and preconceived opinions fracture, and are swept away.

If a combined love for cats can bring people together then much is possible.. 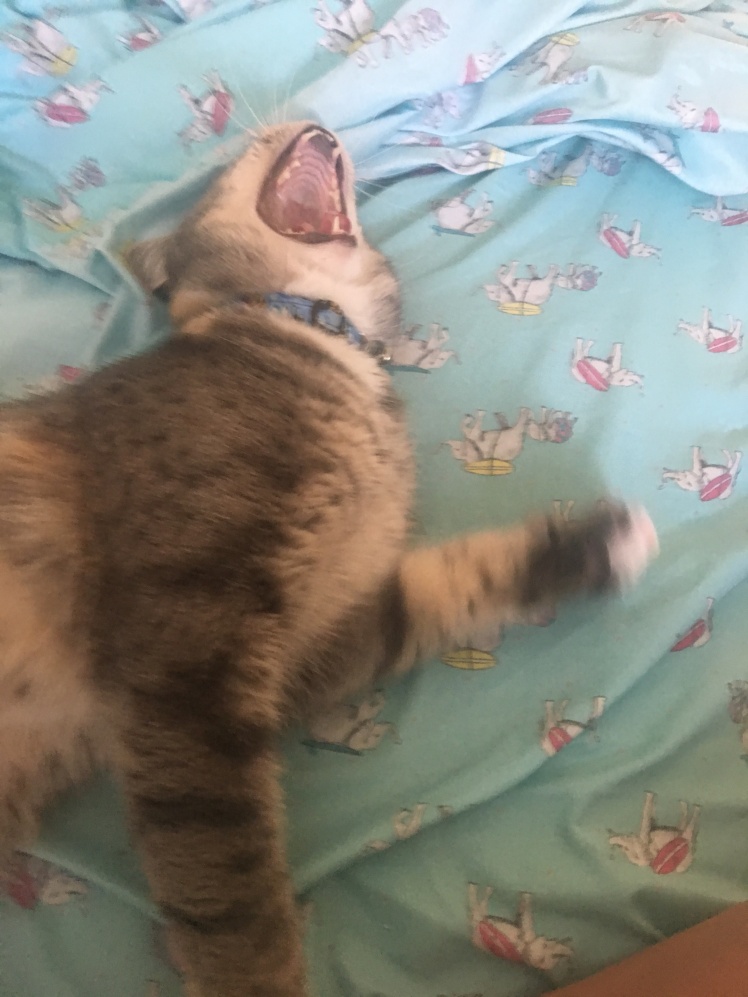 Natalie and Logan sure love their cat, “ Bonkers,” who has a ton of personality, so perhaps the key to “ Debbie’s” heart is through her feline?

One thought on “I blew out my flip flops…”