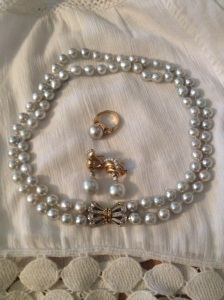 I want to tell you a story….it’s one that is so incredibly dear to my heart..and yes..it’s a love story.  It’s a romance about a set of the most exquisite blue/ grey pearls pictured above.

I went to a wedding yesterday…it was in the mountains..outdoors, and it was set on a lush green lawn, with the majestic Rockies as the backdrop. A rustic arch decorated simply was where the young couple stood to take their vows.  A table with a flowing tablecloth stood behind them..The tablecloth blew in the breeze, and it was just lovely.  Part way through the ceremony, some rather dark clouds were hanging in the distance, and then suddenly, and without fair warning were upon us…Some of us grabbed a tarp, and several umbrellas and attempted to save the dj’s music equipment….but the rains came down, and not just a little…we were getting soaked…it was really significant to me, because the bride and groom carried on through the onslot of wetness as if nothing had occurred. Some  kind soul, stood and sheltered them with an umbrella as they continued on with their ceremony..that was so beautiful to me.  They were blissfully unaware of those around them, they were focused on one another, and their love, and pure bliss at their long awaited day.

Pearls to me symbolize hope..a promise..they are something  incredibly hard to find..at least the really good, and treasured ones are.  The pearls pictured here are those kind of pearls..rare, sacred and costly…this jewelry was a gift from my Father to my Mother.  He was so romantic, and to me, as a young girl, witnessing his undying love for my Mother was such an example of devotion and pure love set right before my eyes.  I never doubted how much my father adored my mother, and vice versa.  He gave the necklace to her one year, I believe one Christmas..they were extravagant..I remember her holding them sacredly in her hands, eyes huge at the incredible gift.  She almost didn’t want to wear them..it seemed too  much, it would perhaps draw unwanted attention to her, and yet these pearls yearned to be warned..to be experienced..after all…they had toiled hard, endured the sea, and all its harshness to become so perfect…someone had to dive for them, many times..had to search incessantly, to bring such a string together.  They had been born from their dark shells and now they needed, yes..they wanted to be in the light…glowing in their beauty, and proud of what they had become..a priceless pearl…a set joined together in unity, in oneness….a prize worthy of adoration…

My Mother was up at the cottage  when the next set of pearls arrived.  My father had been at home during the week, two hours south of the cottage, working during the week, while my Mum was up at the lake looking after “us kids.”  I’m sure it must have been an exhaustive time for her keeping track of us, and caring for us up at the lake while my Dad worked at his job at home in the city.  It was just an arrangement that they had made.  She would stay at the lake house, and he would come up on weekends to enjoy a time of family, bbq burgers on the grill, fresh corn on the cob, local blueberries, huge sun warmed tomatoes, and usually some sort of delicious fruit pie, or butter tarts purchased from “Willy’s” at the end of the cottage road.. Good times…no great times were had together.  At the time you take for granted how amazing these times are together shared as a family.  I’m not sure when he decide to show her the next part of the pearl trio.  However, I do remember her receiving them.  He sheepishly, and with a wide grin, produced a box from his pants pocket.  My Mother looked questioning at him, with a quizzical look…he just indicated for her to open the box, and when she did, she let out an audible gasp!…. Laying there in the box was the most outlandish, fit for  a queen, set of pearl and diamond drop earrings.  Now if you know my Mother, which of course I do rather well, you know that she is not a “snowy” person.  She would not ever in a million lifetimes think of adorning herself in earrings this “glitzy.”  I think that’s why these bobbles are so out of this world.  Even though she didn’t see herself fancy, and queen like, my father, her husband did.  She was rare to him, a jewel needing of  adoration, recognition, and his undying love….which he bestowed upon her with regularity.  It was just so much of a surprise for her to get these earrings , out of the blue, not on any occasion….and for my Dad to have such pleasure giving them to her.  Watching this love story between my parents throughout my life has been one of life greatest and best gifts… Wait …before anybody ever termed the saying, “Bucket List,”…well this would have been on it for me…to witness love the way it was meant to be lived out…with dedication, great love and devotion, and a promise “till death do us part.”

When my Dad became sick with Parkinson’s Disease in his 50’s, I watched with awe the love between my parents.  My father would endure a long long journey with this disease which would eventually steal everything from him.  It was horrifying to see this sickness destroy my Dads’ once strong and healthy body, take his mind, hunch his back, allow him the inability to eat by mouth…it tried to take his dignity, but my Mother would not allow it, and I watched.  I bore witness to his suffering, to my Mums’ suffering…her frustration, loneliness, and utter despair at having the ” love of her life,” stolen out from her right before her eyes…..So many tears, so much loss.  The gift here…stick with me there is one, is to see how my Mother would fight for him.  She wanted him home with her, by his side, she would care for him, but then it became too much, and so she hired caregivers for his at home care.  She endured criticism at her decisions to care for him this way, but she was steadfastly unwavering in her resolve….she would not be moved.  She often said,” he would care for me  Iike this, so of course I will do this for him.”….” I made a vow,” she said, and with a matter of factness that observed no room for argument, she pressed on.  Years and years went by, my father falling more and more disabled under the clutches of this “demon disease,” and she watched…she endured, she loved him.  Even though this woman, my Mother was a quiet person, shy even, when it came to my Dad, a person she loved with all her heart, well, she had the heart of a lion, or a bear.   Nobody was going to tell her what to do when it came to caring for him…wow such strength…such a pearl of great price.  I don’t know if my Dad knew the epic illustration of sacrificial and pure love he was displaying to me, but wow….it has impacted my life immeasurably.  My Mothers’ care of him..I hold in complete reverence and respect…I love her so much.

So…..now the pearls have been gifted to me….the ring, which I had to have refitted, I wear, along with the necklace and earrings together for this wedding celebration that I attended.  Each time I draw them out from their brown velvet oyster shaped jewel box I am struck with this beauty.  When I put them on, with much reverence, I am humbled…they are heavy around my neck, beginning cool, but then they warm up…the earrings, bright and glistening, and the ring there to be gazed on often times through out the day.  They are to be treasured….adored…looked at by others with awe… They are a symbol to me of true love.  Not the kind of love that gives up when pain and suffering comes into life..but I love that says..I will be there..I will love you for better or worse, and even when I said ” I do,” and didn’t have a clue what I was signing up for…I will be your pearl…. I will sleep in the safety of my shell, I will be turned and shaped and I will be ready when the pearl divers come  and find me…I will be ready to shine when the time comes… You can trust in my love, because it is yours…

When my Dad passed away my Mum and I were so struck by how now his body was relaxed..no more contractions, clawed hands, bent feet…finally his head lay down peacefully on his pillow, when for ever so long…he had tried to raise it up, causing his neck muscles to shorten painfully….alas..he was at rest…even though our hearts broke apart at his passing, we were so relieved that his suffering had ended.  At his funeral my Mother wore the pearls….I spoke to different  ones in attendance about the importance of ” the pearls.”  They just shook their heads…speechless… How blessed to have a love like that, and certainly blessed to bare witness of it….the pearls will perhaps journey to more events in my life, and some  some day I hope to pass them on…to tell another of their life…how they came to be, and all that they have meant.

This story was meant to be shared…because like all of the very best love stories forged through fire…if they are real…they will endure…they will press on..because the greatest of these is love.

3 thoughts on “The pearls of great price”