It somehow made its way into the edge of the palm of my hand.  It was not noticeable at first.

It was a tiny thing, and I don’t recall when it occurred, but then it just began to irritate, not a great deal, but enough to be bothersome, and cause me to grab my “ readers,” and take a closer peak at what seemed to be festering within.

There was a small insignificant sliver of wood just under the skin.. no big deal..but how it began to plague my flesh..

It needed to come out.. Perhaps it’s the wanna-be surgeon in me, or just the immense sense of satisfaction that I derive, from searching through my sewing kit, until I locate the object of my quest.. the sewing needle.  Then operation extraction comes into full force.

I just thoroughly enjoy digging out a sliver  with the needle. This may be odd.. on more than one level, but I deem it entirely satisfying to find success in the seemingly insignificant act of poking and prodding my flesh, until out it pops on the point of my neede… that little incessant sprig of wood no bigger than a bread crumb.

It is amazing how such small happenings  can make a good or bad  impact on a “ person, place, or thing.”

I knew my windshield washer fluid was low, but it was night time, and I just didn’t want to take the time to stop, pop my lid, and refuel the reservoir.  I drove on ahead down the country frozen roads, straining to see through the dirty, streaky glass, that made the white winter landscape look especially forbidding.

Tomorrow morning, I will do it… I told myself.. in the morning, when I can see better, and can look carefully, and  put the liquid into the right place.

The squeak of my felt lined  rubber boots on the ground made me realize that the temperature had dipped down farther from the previous evening.. As I started my car, it sounded sluggish, cold, and not interested particularly in responding.. The dash board told me to “ stop engine, low coolant.”

Alarmed… I did just that.. it’s always startling when your car tells you something that it never has before… Time to sit up and pay attention blondie!.. What to do.. What to do?

I contemplated  just restarting the car, and driving next door, where there was a cafe, and grocery goods store, to see if they had any coolant for sale.

The lady that runs the kitchen there is hard working, efficient, and kind.

Its the type of place where you enter, and they know your name, and there is always a smile of welcome.  It’s like in the sitcom, “ Cheers,” from years ago.. “ everybody wants to go to a place where everybody knows your name.”  I’m not sure if I quoted that correctly, but the sentiment is sincere.. The sense of belonging is a comfort, and it can be lost in a big city type setting.

Janin greeted me by name, and I, her.  There was a man sitting with his winter wool cap on, perched on the red vinyl covered bar stool, waiting for his breakfast.  He turned around, as I asked Janin if she sold coolant.

I explained the warning on the dashboard, and this lovely fellow gave me his diagnosis.

“ You will need to get that coolant  ASAP.”

Janin suggested asking Andy, who was working in the back kitchen to take a  lookie under my hood.  Andy, quite splendidly for me, turned out to be a mechanic..She beckoned him, and then.. as if by magic.. there he was..

He emerged from the back kitchen wiping his hands on his trousers, and he sauntered my way, with a quizzical expression upon his face.

Janin explained what was going on, and he, and the other guy from the breakfast bar came out into the frigid morning to check things out.

I learned more about my car, and Andy explained to me, in a very kind fashion, that there was still some coolant left in the reservoir, and I should be able to make it to the gas station up the road.  He said I needed “ half and half,” and I responded..

He looked at me blankly, and I kind of realized, I was an idiot, and thanked him profusely for coming to my aid.

I made it up to the gas station, purchased my coolant, borrowed a funnel, and the guy working inside, put on his coat, and kindly  helped me fill it up.

I’m just dumbfounded at the simple kindnesses that show the biggest impact.  I was, and am very thankful.

I know precious little about all of the functions and working parts of my car, but as soon as I asked, these people were so willing to help. This is a beautiful thing.  Humans can be so wonderful to one another, working together, and solving problems..

I’ve mentioned before in previous writings, that my neighbor across the street snow blows out my driveway conscientiously whenever he does his own.  He will not let me pay him.. but I don’t think he can even realize the deep impact that his generosity, and time doing this “ act of service,” has affected me..

Just good people, doing their thing.. living their lives..caring… “ loving their neighbor as themselves,” …community… belonging.. returning my wayward beagle when she goes astray… even posting on Facebook about finding my dog out in the cold.. and then knocking on over 10 doors, and not giving up, until another neighbor found her…it’s astounding,  and reignites my belief that human kindness goes such a long way… if we choose to practice it.

I am consistently aware, and genuinely surprised in the goodness of others.

I know that there are lots who tear others down, but I just can’t focus on those… it’s terrible to get lost in anothers’ pain.  There is no way to understand what drives some… and Im learning, as a reforming “ people pleaser,” that  it’s not for me to fix…

With this in mind, while visiting Mum, I can see the utter sense of joy, and contentment, when she fixes things, and helps me.. we like to help each other, there is a “feel good” endorphin boost, when we act in community with each other. 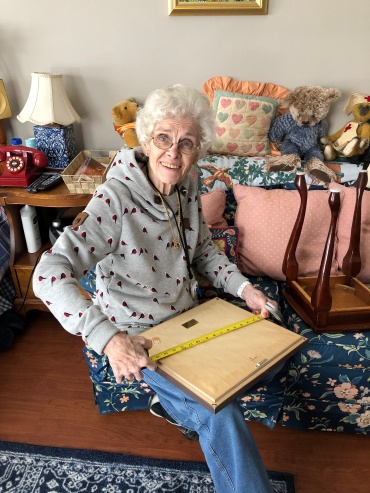 I’ve heard the slogan..” just .. be kind,” and for me this also means be gentle with people, tread carefully as you decide to walk beside another…This simple act  stays with me.. it lasts..it makes you cry… and it means that you were noticed..you made a difference, and you entered in…

It is the “ good Samaritan” who would not pass by.. even when he knew it would cost him, he knew it was worth it..

I believe it was my Mum who first took the splinter out of my body when I was young.  She showed me the technique with the needle, and has taught me so much about fixing stuff.  I tell her this now, and thank her.  I’m trying to just sit, and be present with her.. it is satisfying.. to just be with her… such a blessing.

Cory, my cousin,  and David, her husband, came down for a visit, and brought a selection of Mum’s belongings to further enhance her living space..

Cory went through old photos, and took pictures of the photos, for her own  collection.  Mum recognized many of the photos with her classmates in them, and reminisced about them… such special times..memory makers for all of us.. .

We headed out for Chinese food at the  Mandarin Buffet, and there was enough snow in the parking lot to make driving rather interesting..There is a lot of snow in these parts .

We hung up miscellaneous and meaningful artwork, and I just about lost  my balance and tipped  off the couch..while doing it.. priceless.

It was when my Mother was trying to spot me while I was standing on her couch that caused us amusement.  She was sure I was going to fall and crack my head open…

These precarious feats that we pursue to make our dear ones smile,and  cause them to feel loved.. the kindness and family that binds us together, is the soft squeeze  that tugs at our hearts, and pulls us through circumstances that we otherwise could not navigate.

The little sliver in my hand reminds me that even when hurtful things are said, and maybe done, if I decide  to let them fester, and irritate, the only one it really hurts is me.. I have to deal with it… remove the piece of wood so it does not cause further damage…

Concentrating on the friendship  of others… the simple acts… the genuine good heartedness of folks… this brings the heart smiles .

One thought on “Small Town goodness…”